Birds reduced insect pests in conventional alfalfa by over 33%, according to a new study published in Agriculture, Ecosystems & Environment. Habitat is key: the reduction of pests occurs where crops are near habitat. The study found that the fields with bordering trees had a lower number of pest weevils near those field borders, indicating that birds are very important pest control operators. When farms provide habitat near food sources (in this case pest insects), they benefit more than those farms without habitat on the edges.

Sara Kross and her research team found that simple conservation measures, such as woody vegetation along alfalfa field edges, provided a huge boost in benefits, both to and from biodiversity. For example, they found that alfalfa farms with at least 2 trees on the field edge had more than 13 different bird species. Moreover, as the complexity of the habitat increased on the edge, the diversity of birds went up.

Contrast that with alfalfa farms who only had weeds or dirt roads next to the crops – they only had 5 birds species present. That is a big difference; especially if you want reduce your costly inputs to control pests on your crops.

This is important research that shows when farmers provide habitat, even simple habitat like a few trees on the edge of fields, it makes a huge difference in terms of the ecosystem services they receive.

But even more, these woody vegetation buffers are also providing habitat for other species, such as pollinators, beneficial insects, bats, and more. Encouraging habitat on farm edges has far-reaching benefits and goes even beyond the research found here. 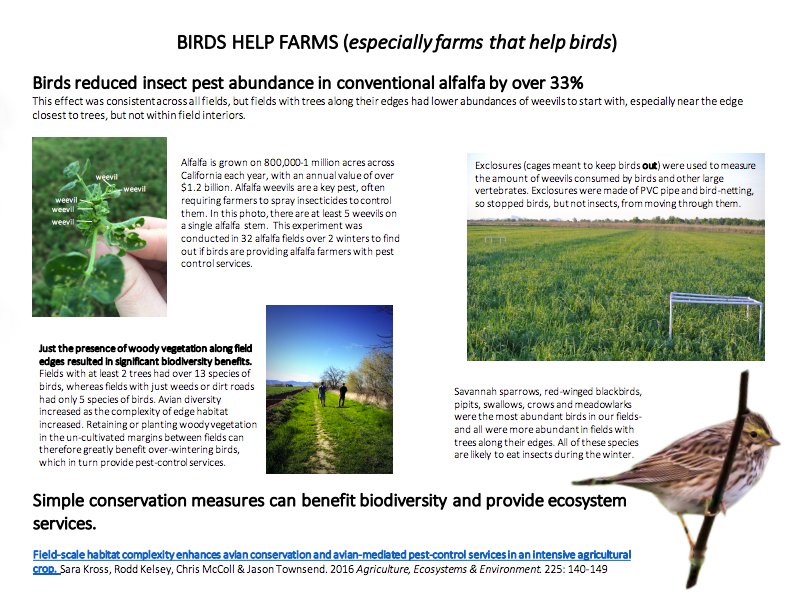