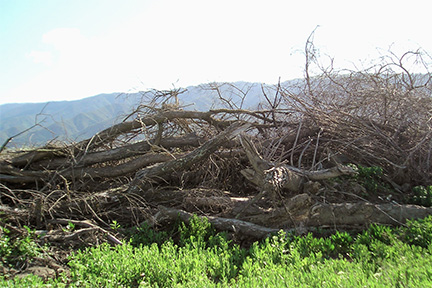 In 2006, an outbreak of E. coli O157 from spinach was traced back to a farm on California's Central coast, the home of our nation's fresh-cut salad industry. While it was never determined how the spinach became contaminated, non-native feral pigs were considered possible culprits. This resulted in ALL wildlife being viewed as a source of food-borne pathogen contamination, even though research so far indicates that NATIVE wildlife generally pose a low risk of carrying human pathogens (although certain localized populations have increased risk).

Six months after the outbreak, the Resource Conservation District of Monterey County, CA conducted a survey of produce growers on California's Central Coast. Eighty-nine percent of respondents indicated that they actively discouraged or eliminated wildlife from produce fields in order to meet food safety requirements. Thirty-two percent of responding leafy-greens growers reported actively removing non-crop vegetation from their land due to comments by food safety auditors.

In 2013, research found that between 2005 and 2009 13.3 percent of the remaining wetlands and riverside habitat in the Salinas Valley were eliminated or degraded.

In a 2015 study that combined land use maps with pathogen prevalence in produce, irrigation water and rodents, researchers found that from 2007 to 2013 habitat removal was not effectively reducing E. coli or Salmonella pathogen contamination risk on California's Central Coast.