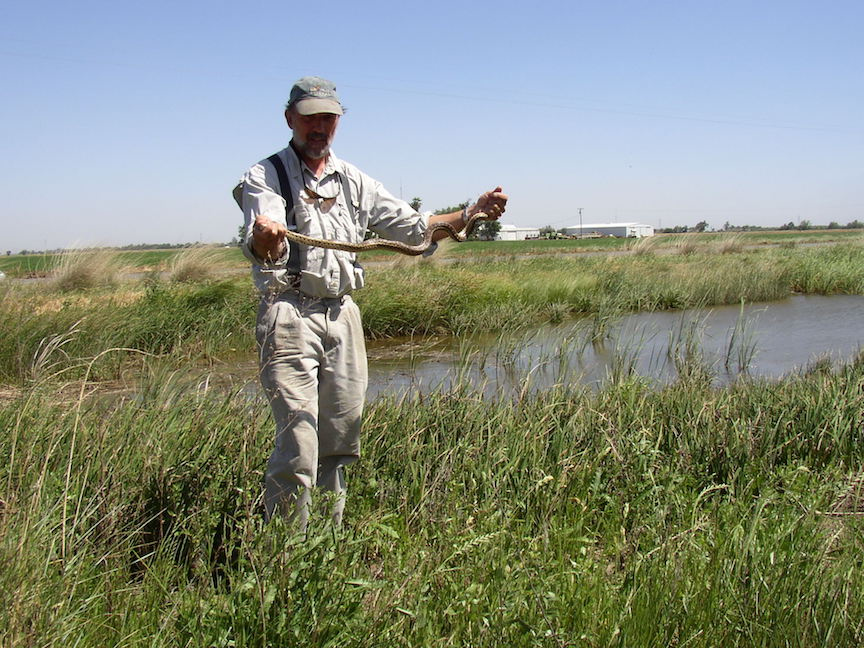 John Anderson, former WFA Advisor, pioneer in bringing farm edges back to life and founder of Hedgerow Farms Nursery in Winters, California, passed on to his grassland in the sky in August.

John was a mentor to many of us in the field of habitat restoration, tirelessly offering his time and resources to help further the enhancement of biodiversity on farms and in the environment. He constantly worked to vegetate with native grasses and riparian vegetation the miles of herbicided and scraped ditches in Yolo County.

His famous quote, “The goal of ‘clean farming’ is weed-free, not vegetation-free” was a battle-cry for those of us working to bring biodiversity and nature into agriculture. As we continue to integrate biological practices into farming, John Anderson’s inspiration and legacy will always be present in our work.

New Video: Farming With Nature is the Solution 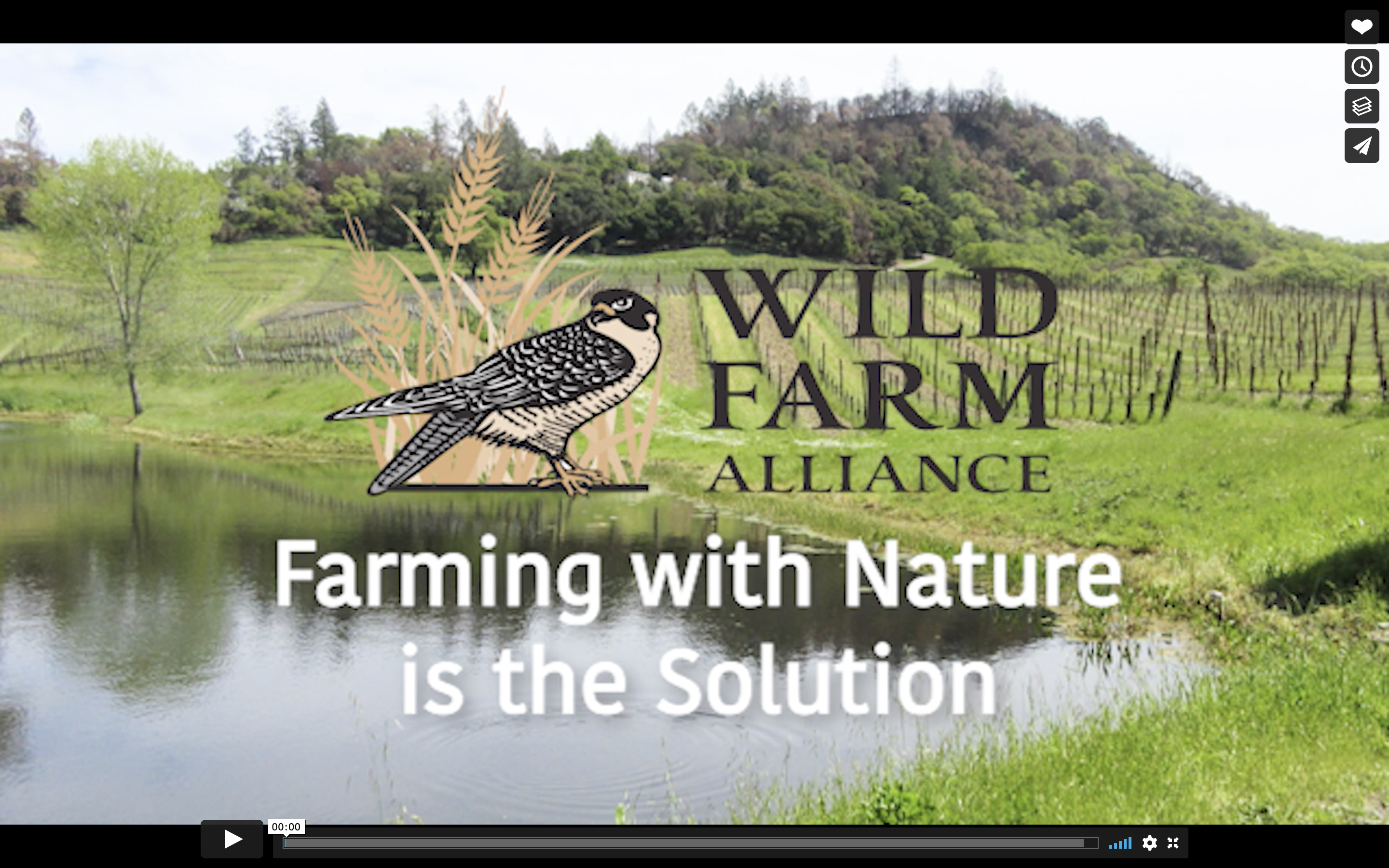 In case you missed it last week, we released a new video in our series about supporting beneficial birds on the farm. This video features Ames Morison of Medlock Ames Vineyard and Breanna Martinico, a PhD Ecology Student at UC Davis.

At Medlock Ames Vineyard located in Alexander Valley, California, conservation is core to their farming practices. They know their actions support essential services for their vineyard like pest control from birds. Barn Owls are encouraged with nest boxes, and hawks with perches, making rodents much less of a problem. Western Bluebirds are supported with nest boxes too and they will likely help keep Sharpshooter numbers down.

Besides boxes and perches providing this structural habitat, 80% of the land is conserved in vegetative habitat—native oak woodlands, grasslands, and chaparral—which provide other food sources for the birds to feed their young during nesting season, and to feed themselves other times of the year.

These natural landscapes also provide Barn Owls and Western Bluebirds with what they need—more foraging habitat than the vineyard itself—which ensures better nest box occupancy. With large parts of the estate dedicated to nature, safe wildlife movement corridors are present and the watershed’s health is protected.

This video is part of our series, where we are featuring farmer leaders, agricultural professionals, researchers and conservationists. You can watch our other videos and learn more on WFA's Beneficial Birds Multimedia Story Platform. 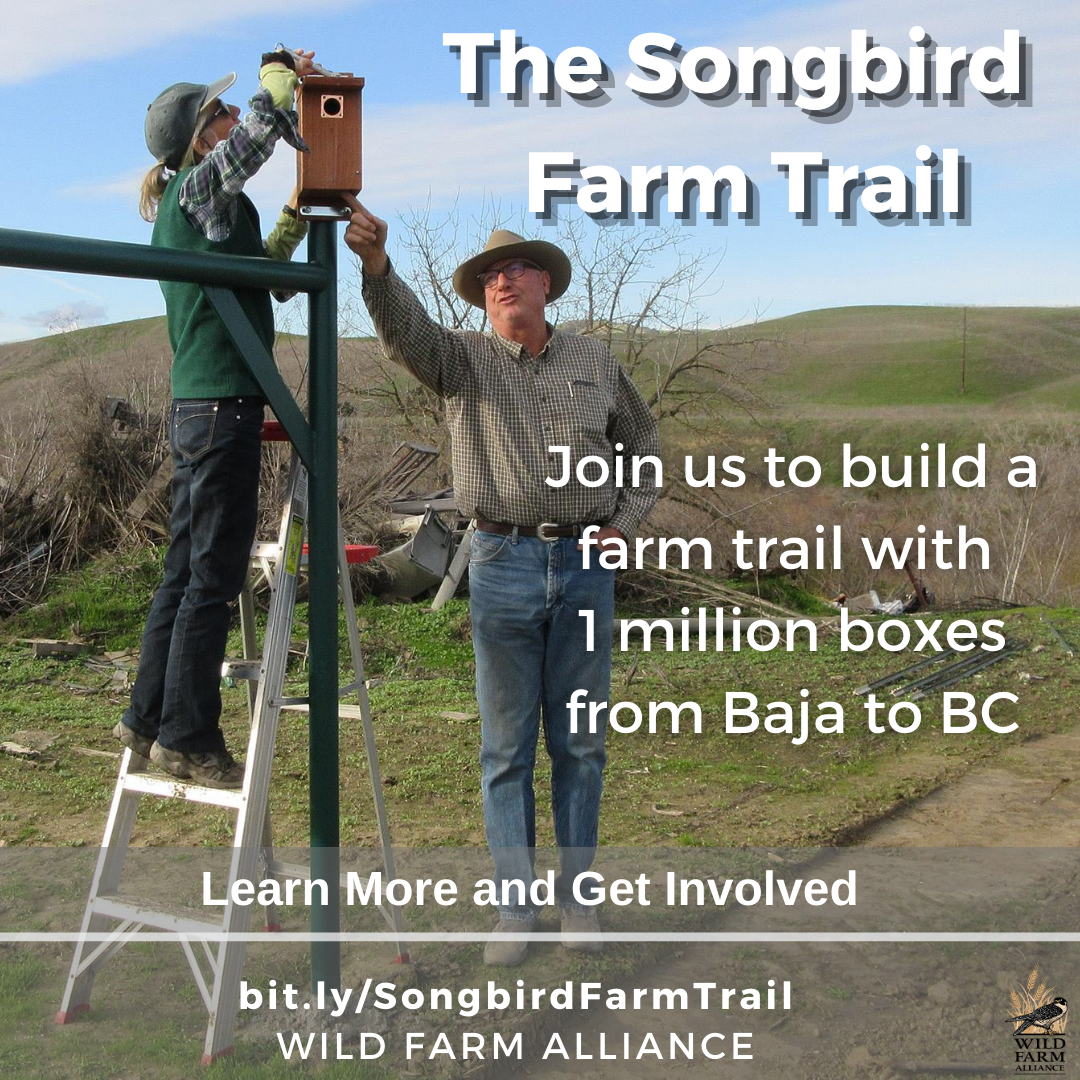 It was getting late on a Saturday evening in May and we had one more farm to visit. We were checking some of the nest boxes that were installed on 16 farms mostly in the Monterey Bay Area this past winter.

Jerry Thomas met us out by their farm pond where one box was placed on a retractable pole. The occupants, who had already fledged, left the tell-tail signs of who they were- Western Bluebirds (WEBL). Well, to be fair, we could narrow it down to a few birds, since the box sports a hole guard which keeps out larger birds that might want to nest in the box themselves, or worse, prey on the nestlings. Inside was a grassy nest covered with weeks of bird poop. Yes, we could check off that the box was used!

While we don’t know for sure if the young successfully fledged, Cornell’s NestWatch program, where weekly monitoring of nests is reported, estimated that about 75% of WEBLs’ nest attempts were successful in California in 2019. Next, we checked the other box on the Thomas Farm—nothing, darn! Wait, we realized it was our fault. This box was placed too close to a line of conifers where a Red-shouldered Hawk pair had moved in to raise their own family. 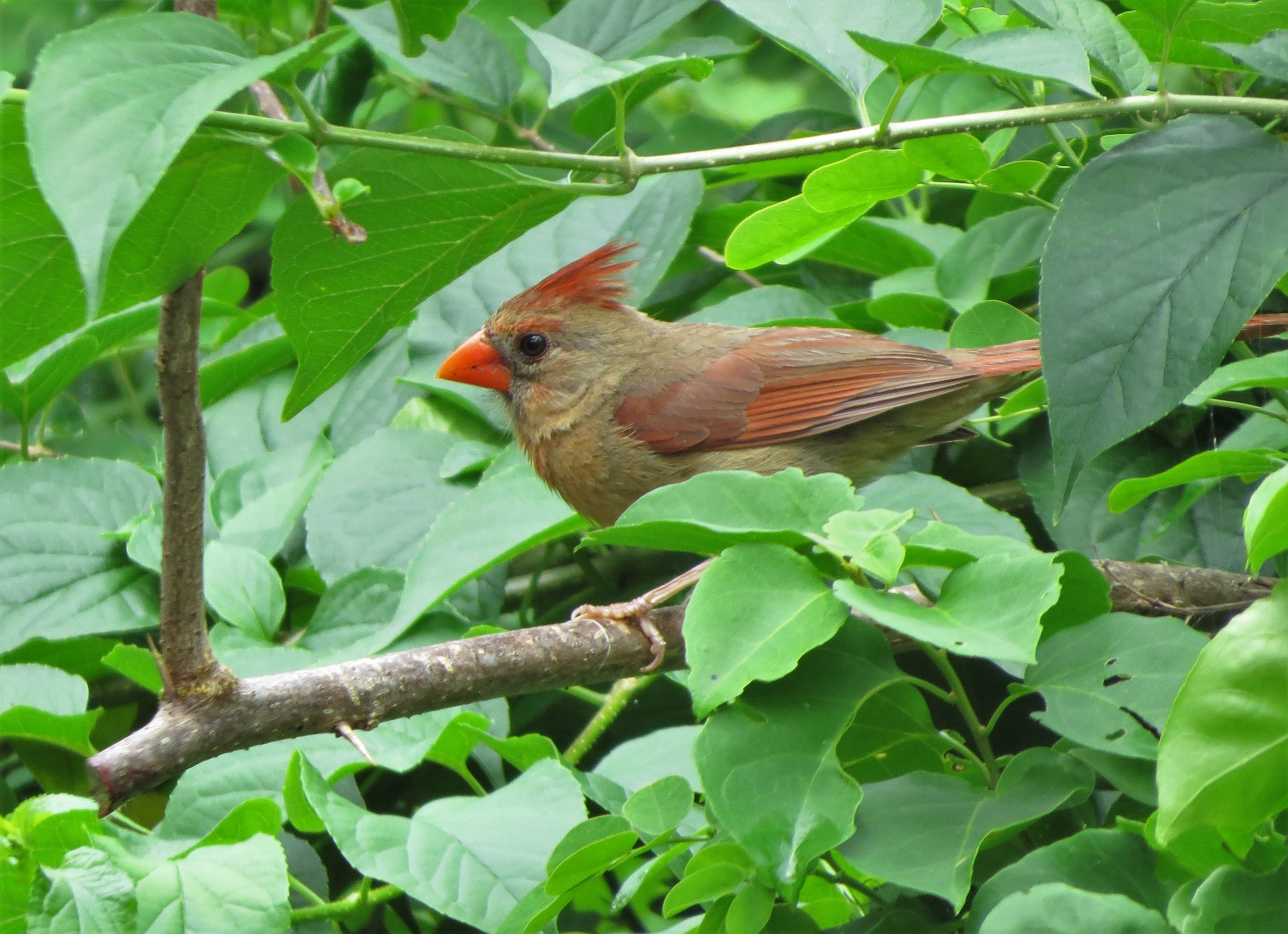 A recent study about the role of diversity in science reviewed 20 years of research on female bird song and found that the key people in driving this shift towards studying female birdsong was women. Because of this, we are beginning to see how widespread female birdsong is especially in tropical species, and how both sexes originally evolved to have songs.

According to the study, the importance of having a diversity of researchers and research leaders is that it leads to a broader range of questions being asked about issues, and utilize more varied research methods. In addition, allowing researchers to self identify is important to show more correct gender data and allow for correct gender identification. 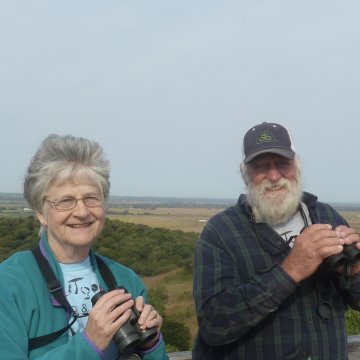 Don and Janis Paseka share the importance of being involved with observing birds on your farm. They don’t just bird watch, they’re self-proclaimed “birders” which to them means observing birds, but also changes in their behavior. They have witnessed some amazing feats such as an estimated 14,000 migrating hawks passing over their farm in one day.

They have found through years on the farm that no tillage is ideal for nesting Killdeer, Sandpiper, Lark, and Sparrow habitat. They have also managed to attract game birds and songbirds and have found themselves in a birder’s paradise. They note that farmers have an advantage over other birders because they are a part of the bird’s world every day, and farmers should take advantage of this unique opportunity. 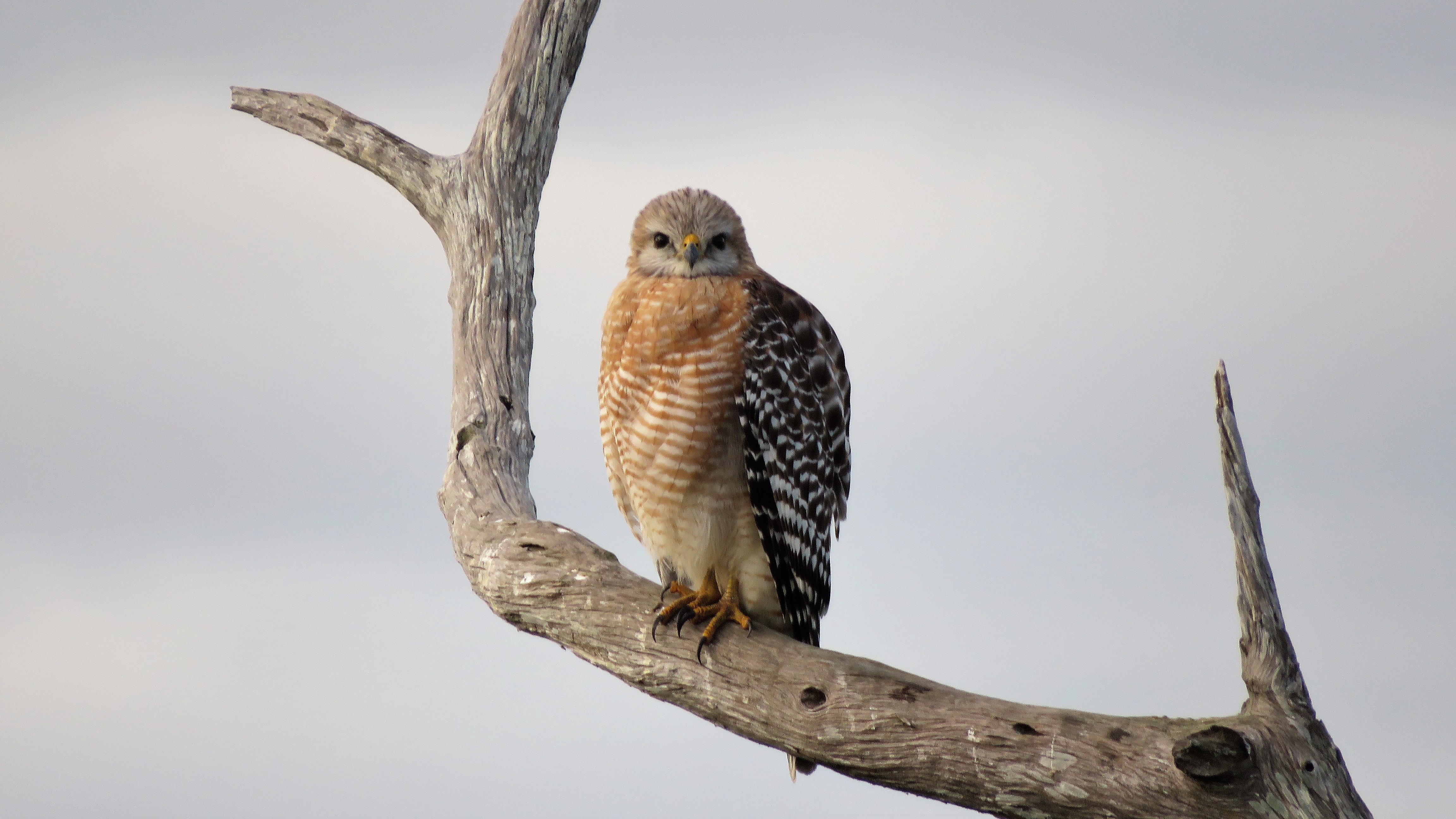 Article reprinted from eOrganic, by several authors including Breanna Martinico who is featured in our latest video.

Birds of prey, commonly called raptors, are valued by many growers for cultural and aesthetic reasons, in addition to the beneficial pest control services they provide (Kross et al., 2017).

Raptors are often difficult to distinguish from each other aside from a few raptors with telltale markings, such as the distinct red tail of the red-tailed hawk (Buteo jamaicensis) or the white head of a bald eagle (Haliaeetus leucocephalus). Habitat can also be a good cue because some raptors are strongly associated with grassland habitat, while others are associated with forests, urban areas, or agriculture. These habitat associations and each raptor’s distinct nesting needs mean that different approaches are needed to attract different raptor species. Further, the land usage of your neighbors can affect which raptor species are likely to visit your farm. Here, we provide information about how to identify and manage six raptor species commonly found on farms in the United States. We also provide information on what types of pests each can help control and highlight how pest control services may scale up to increased farm profitability (Kross et al., 2012; Shave et al., 2018). For example, Kross et al. (2012) showed that reintroduction of threatened falcons into vineyards could increase Pinot Noir profitability by $326/ha. We conclude by providing additional resources to continue learning about raptors.

New Book: Perilous Bounty: The Looming Collapse of American Farming and How We Can Prevent It by Tom Philpott 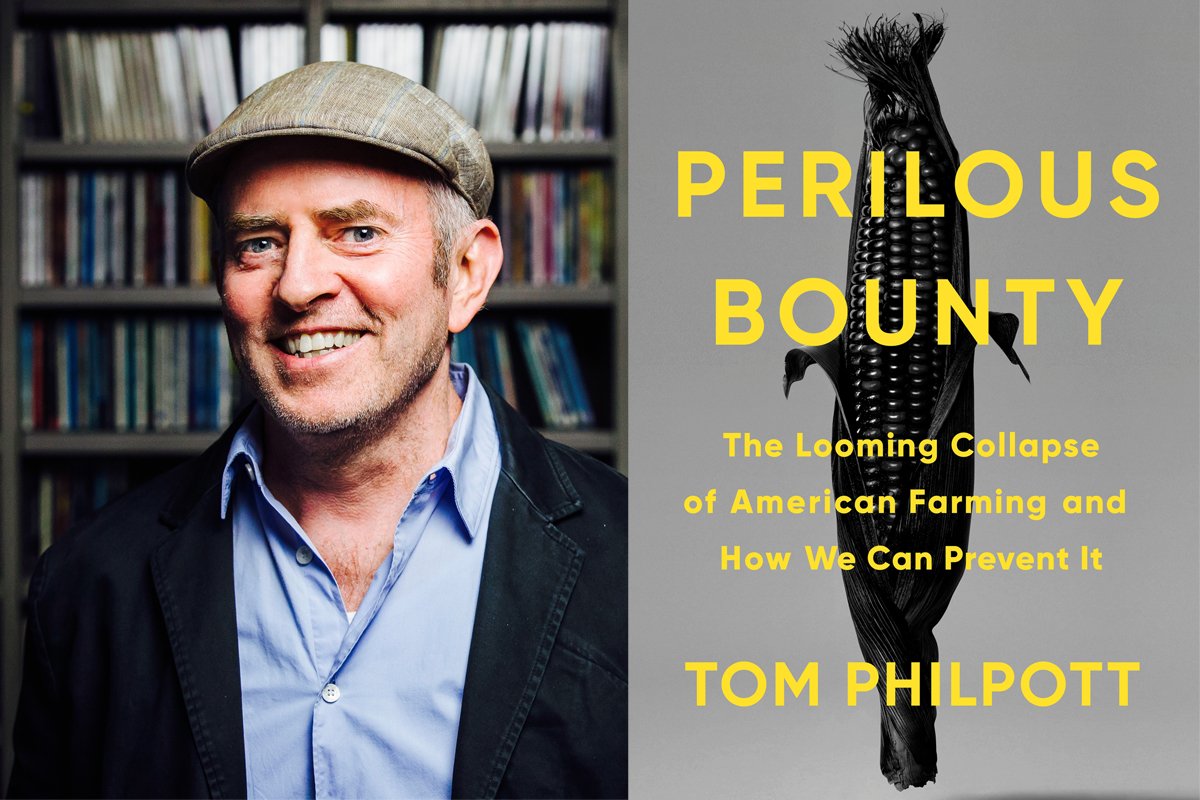 Tom Philpott, Food and Ag Correspondent for Mother Jones, recently came out with a new book that addresses the current trajectory of farming in California's Central Valley and the Corn Belt. His book talks about the issues of climate change and the power of a few corporations who control the majority of the seeds and pesticides that are used in American farming.

He notes that resource scarcity is a looming problem due to our current farming system and the policies that keep it alive, and looks at some examples of how farmers are changing their practices for the better. The book also explores the negative health impacts of this system on the farmers and the communities that are a part of these farming operations.

Funds for U.S. Farmers Impacted by the Pandemic 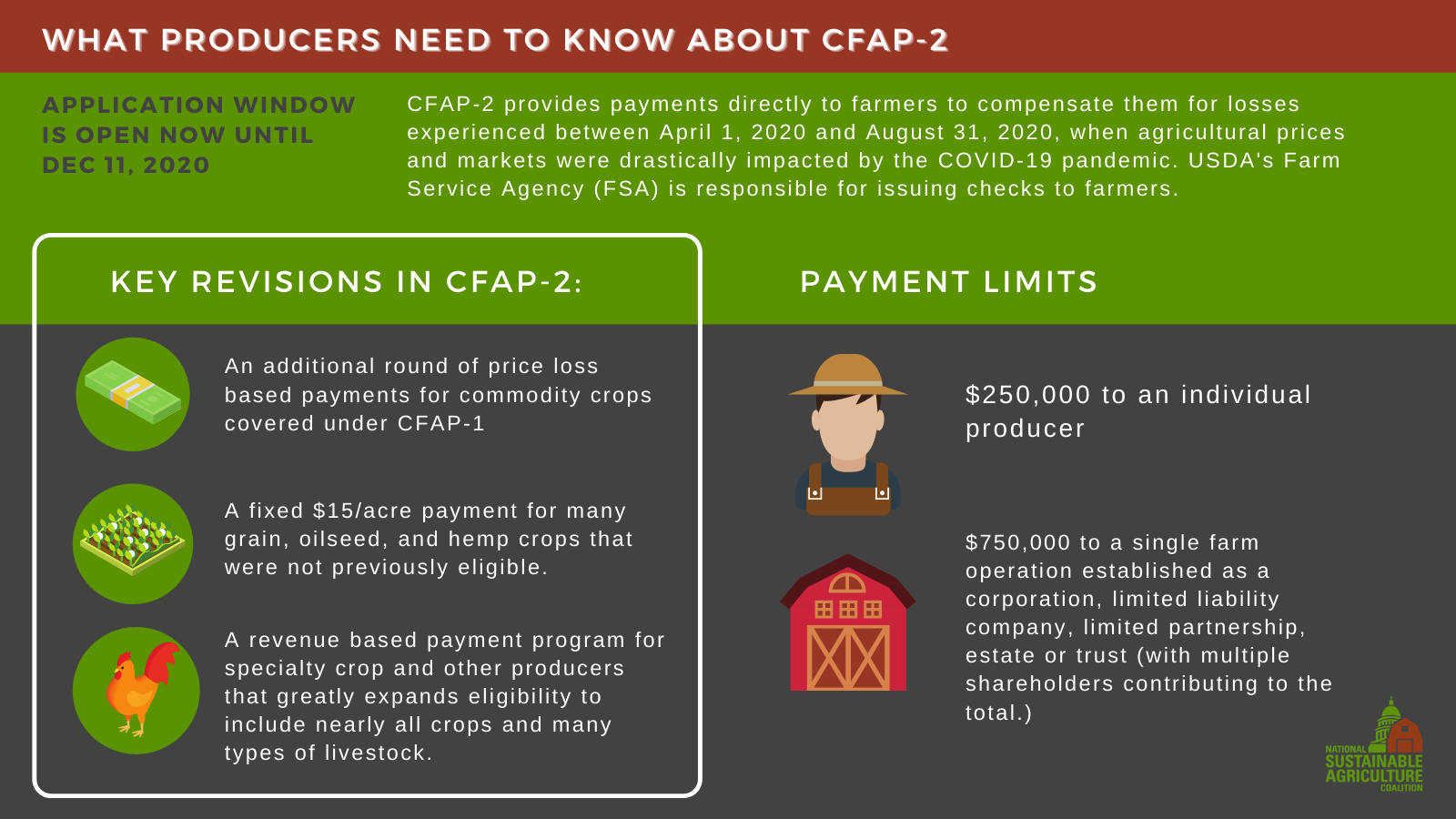 The United States Department of Agriculture (USDA) has announced an additional $13 billion in payments for farmers and ranchers who have suffered financial losses due to the COVID-19 pandemic. This new installment of the program includes new payment options and commodities that are certain to benefit smaller, more diversified growers who weren’t eligible for or compensated fairly by the first iteration of the program. Round 2 of assistance covers an incredibly wide variety of crop and livestock production; some additional key revisions to the program include:

*Revenue-based payments, which are based on 2019 farm sales and cover nearly all crops and many types of livestock.

*Additional round of assistance for price trigger commodity crops cover under CFAP-1. So if you applied to Coronavirus Food Assistance Program (CFAP-1), Payroll Protection Program (PPP), or Economic Injury Disaster Loan (EIDL), you are STILL eligible to receive payments this round!

A complete list of eligible commodities, payment rates and calculations can be found on farmers.gov/cfap. To learn more about the program and its application process, visit the NSAC CFAP 101 for producers page and connect with your local Farm Service Agency (FSA) county office today! Apply now through December 11, 2020! 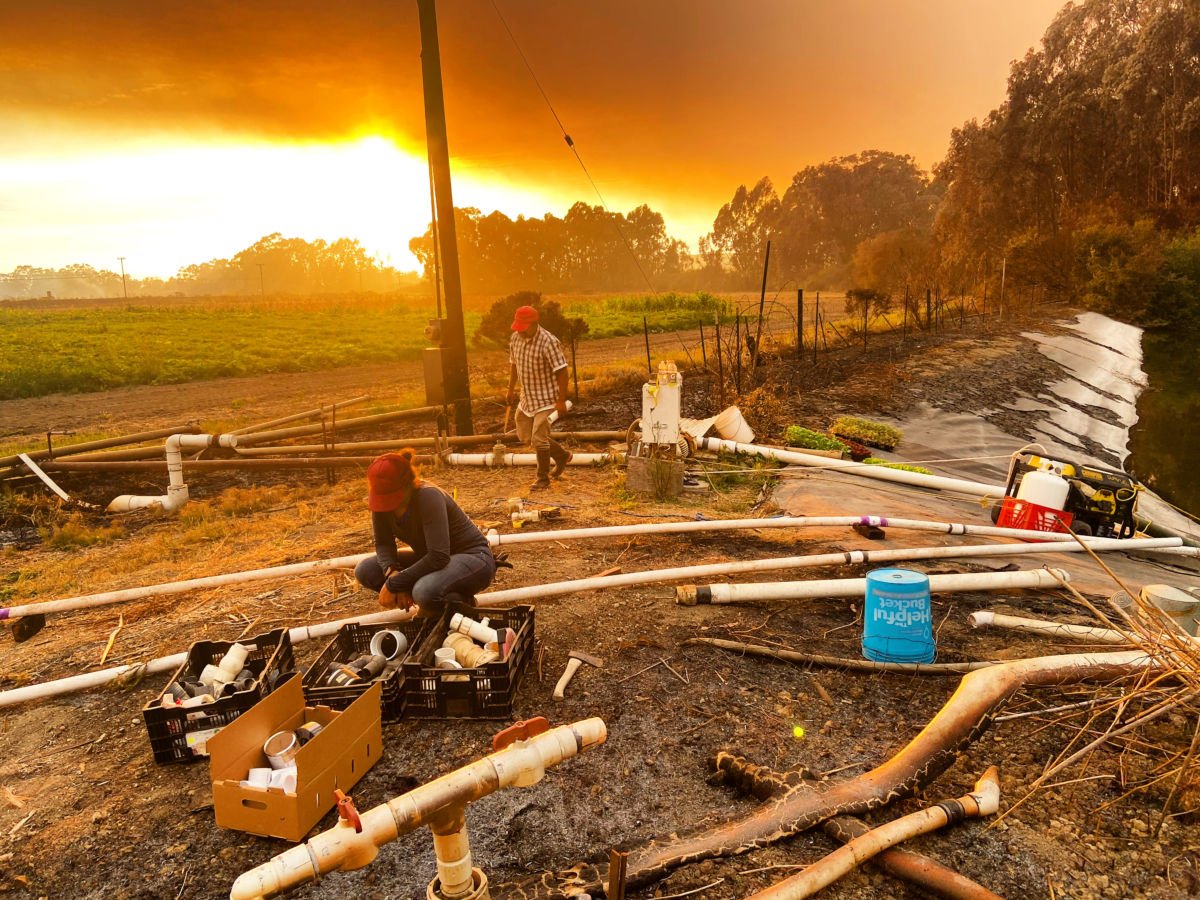 This summer, wildfires devastated farms across California - burning crops and structures. California Certified Organic Farmers (CCOF) is currently accepting applications from certified organic farmers (not just CCOF-certified) for their Bricmont Hardship Assistance fund. If you are a farmer, or know of a farmer affected by the California wildfires, you can apply by November 20, 2020. Click here to apply.

In addition, Community Alliance with Family Farmers (CAFF) is re-launching its California Family Farmer Emergency Fund, offering direct support to the agricultural community impacted by disaster, in particular farmers who fall through the cracks of traditional safety nets. Click here to apply.

September 2022 - News from the Wild Side