Lou and Susan Preston of Preston Farm and Winery in Healdsburg’s Dry Creek Valley of California. Photo from prestonfarmandwinery.com

My friend Lou Preston has caught the “hedgerow bug.” Lou is a winemaker and diversified organic farmer of substantial renown. He lives on a 125-acre vineyard in Sonoma County’s Dry Creek Valley that he and his wife Susan and their daughters have built into something extremely special over the past 30 years.

Symptoms of the hedgerow bug come on suddenly, an overwhelming urge and passion for planting native shrubs, trees, grasses

Symptoms of the hedgerow bug come on suddenly, an overwhelming urge and passion for planting native shrubs, trees, grasses, and other plants in areas that once may have been mowed or weeded or even cultivated in some form of production. It usually starts slowly, with limited experiments on field borders, roadsides, or stream banks. Once infected, the roots of this new life-altering outlook on farming and gardening and landscaping grow deep. Ideas of the landscape become immensely more nuanced and preconceived notions of what a farm should look like quickly fall away.

Landowners throughout the country look for all kinds of opportunities to “go native” with their plantings. Sometimes entire rows of vines or orchard trees or cultivated fields may be retired as a way to integrate more natives into the mix. The benefits of such plantings are many and could take a whole essay to address, but I’ll name a few here. Year-round sources of pollen and nectar that attract local beneficial insects and pollinators that can directly affect crop output; stabilization of soils and filtration of runoff; on-farm habitat for a variety of other creatures; buffers from drift off various kinds; an overall enhanced sense of stewardship that comes with being part of coevolving beauty. 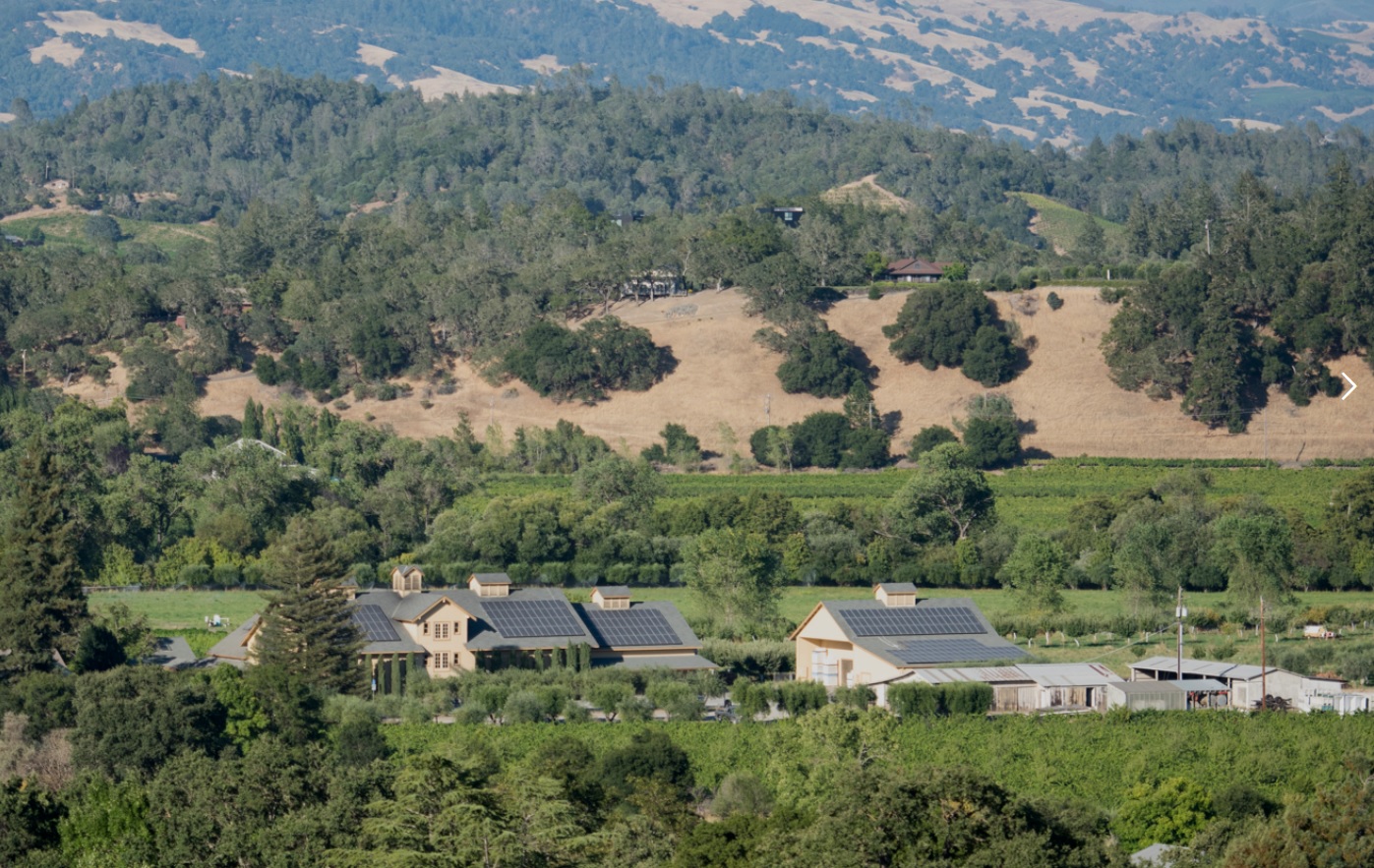 In Lou’s case, he and Susan have created a diverse faming operation at the northern end of the Dry Creek Valley. Over the years they have planted more than 100 acres of carefully selected varietals for their estate wines, as well as hundreds of olive trees for both oil and curing, bountiful gardens, and an increasing number of heirloom fruit trees. The last fifteen years at their farm has really been a journey in creating quality on many levels. After achieving an extraordinary output of 30,000 cases of wine in the late 1980s, they eventually dramatically reduced their output to 8,000 cases.

This has allowed them to spend less time marketing their wines and more energy on selecting the very best fruit and achieving far more diversity in the way they live their lives and in the numbers of products they make. Olive curing and olive oil processing have also became a great complement to their winemaking operations. Along the way, Lou blossomed into a fanatical bread baker, and as the vineyard became an increasingly popular destination in Dry Creek Valley’s wine country, oven fresh breads deepened the experience for visitors. (A little sourdough with your wine and olive oil anyone?) 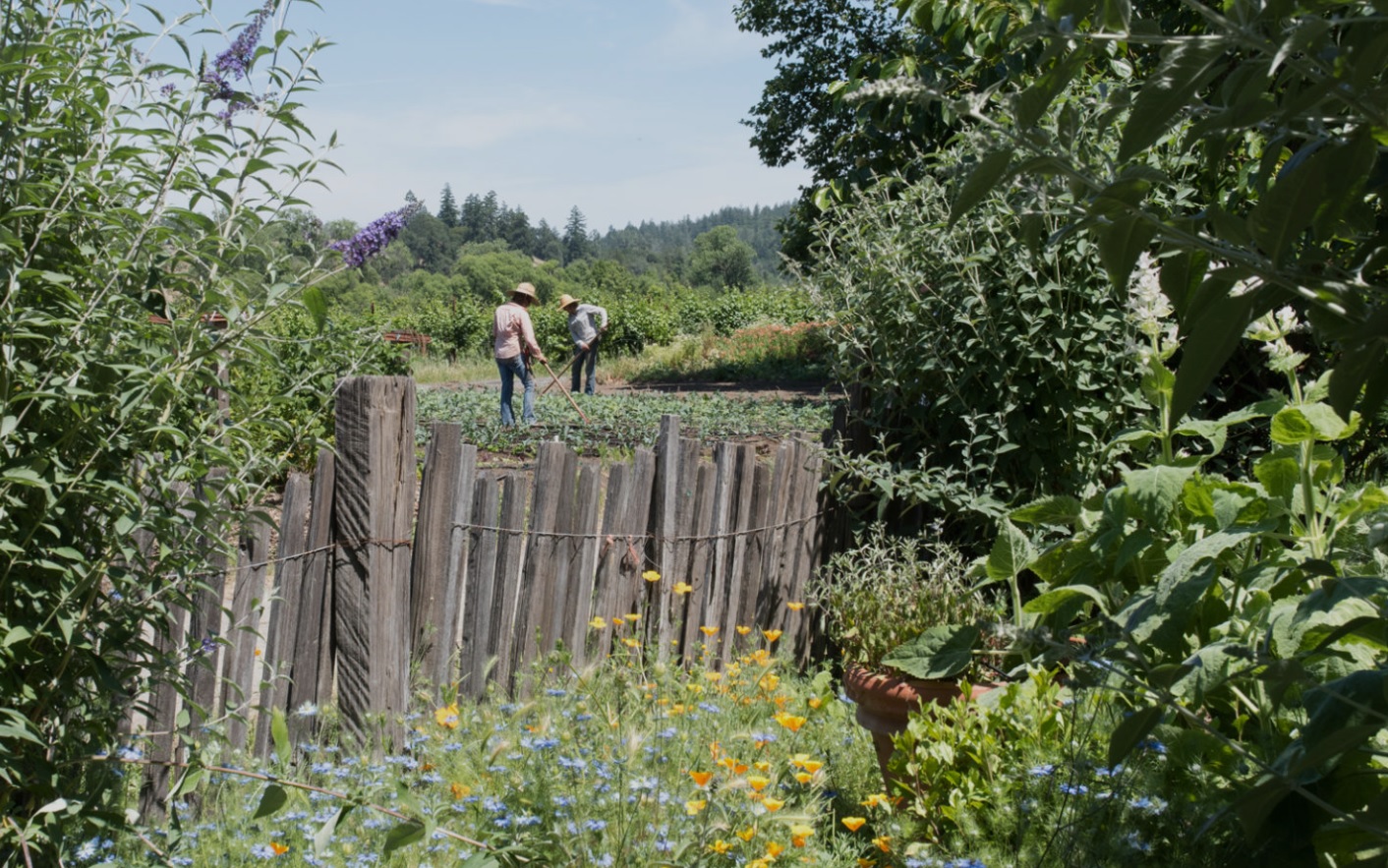 With a commitment to diversity and artisan craftsmanship well established, concerns about sustainability also began to dominate their priorities for their land. They applied and were granted organic certification, and developed a localized system of compost teas to fertilize and stimulate resilience within the vineyards and olive orchards. Tractors were converted to biodiesel made from reprocessed local fast food grease. Infrastructure investments in a sizeable array of photovoltaic panels as well as a new barn insulated with straw bales provide both active and passive solar energy. Lou emerged as an outspoken advocate for an initiative calling for a ten-year moratorium on genetically modified crops in Sonoma County. It was unfortunately defeated in the November 2005 election due to a heavily industry-funded, Farm Bureau-led campaign based on misrepresentations of fact, hysteria, and bold-faced lies. (Genetically modified crops will not benefit Sonoma County farmers.)

Hedgerows are the latest step in the Prestons’ journey

Hedgerows are the latest step in the Prestons’ journey, but are by no means their only foray into habitat restoration.

They have been actively working for years to reduce erosion, stabilize stream banks, remove invasive species, and replant the section of Dry Creek that meanders through their property. A year or so ago, Lou told me, my chapters on hedgerows in Farming with the Wild inspired him to alter his vision of how to take his stewardship practices to a new level. In typical Lou Preston fashion, he jumped in feet first, doing his homework, and checking into the local resources that were available. Working with a Sonoma County native plant expert, he’s planted a surprising number of hedgerows and other living borders on various areas of the property. And his excitement for this latest evolution in his family’s relationship with the land is evident and seemingly uncontainable.

We can only hope this hedgerow bug is extremely contagious. In order to establish the kind of connectivity and “permeability” throughout our farmed regions that may help insure a future alive with wildness, farmers committed to sustainability like Lou Preston can’t be working in isolation. His actions, and others like him, must become part of a larger vision in which entire regions of neighboring landowners are farming with the wild in some sense of unity and spirit. In that way hedgerows grow to hedge thickets and then to shelterbelts and wildways, linking uplands to lowlands, spanning entire watersheds, even while vital diverse rural economies are thriving.