Working in Harmony with Nature and Community

Written by Janet McGarry - Deep in the heart of California’s Central Valley, lying in the dry parched soils of the former Tulare Lake, there is a farm: with vegetables, grains, livestock, hedgerows and windbreaks thriving in an area that once was the largest lake west of the Mississippi.

The farmers of TAC Farm are helping to revitalize the town of Allensworth, the first town in California established by African Americans in 1908 and the site of the Colonel Allensworth Historic Park. They are improving the health of their agricultural land with the help of a grant from the CDFA’s Healthy Soil Program. By planting cover crops, native plant hedgerows and windbreaks, and applying compost, TAC Farm is creating healthy soil, sequestering carbon and providing habitat for beneficial insects, birds and other wildlife. 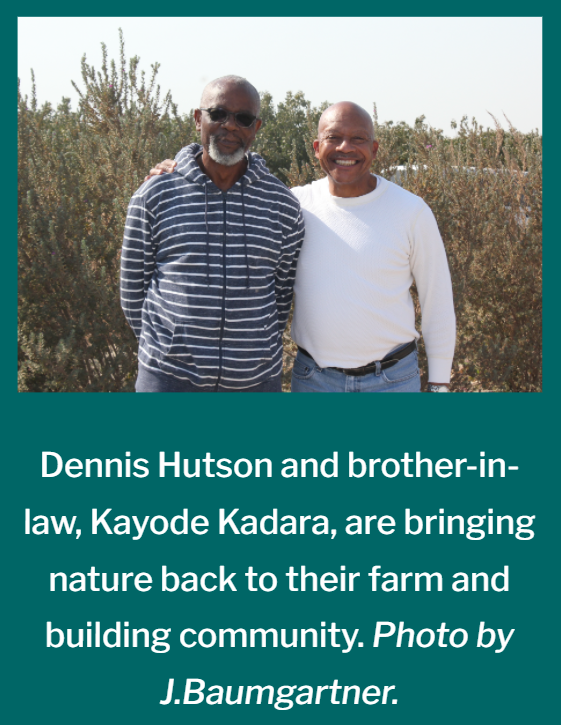 Dennis Hutson, a former Air Force Chaplain and United Methodist Minister, decided to start TAC Farm while visiting his mother’s home in Allensworth. She was concerned that the town would die because so many residents were moving away.  Dennis thought a farm could help create an economic base for the community and educate residents and visitors about sustainable agriculture and Allensworth’s historical significance.  In 2007, he purchased approximately 60 acres in the town and started farming it. “I never really thought of being a farmer but I am now. It’s exciting.”

The town is named after Colonel Allen Allensworth, a former slave who fought for the Union during the Civil War and was the highest-ranking black officer in the U.S. Army when he retired in 1906 as a chaplain for the Buffalo Soldiers. Allensworth and four other men wanted to create a community where African Americans could escape oppression from Jim Crow laws and become self-sufficient, and chose Tulare County where land was fertile, plentiful and inexpensive. By 1914, the town had grown to 100 acres and more than 200 inhabitants, but with a seriously lowered water table, the removal of the railroad train stop and the discovery of heavy concentrations of arsenic in the groundwater, its economic base was lost, and it struggled through the hardships of the Depression. During these struggling times for the town, in 1914 Colonel Allensworth was killed by a motorcyclist while crossing the street in Monrovia, California. Over the decades, residents left to find work elsewhere and the population dwindled to only 90 in the early 1970’s. In 1976, the California State Parks and Recreation Commission approved plans to develop the Colonel Allensworth Historic Park.

In 2010, Dennis’s twin sister Denise and her husband Kayode Kadara, who had recently retired, moved from the Bay Area to Allensworth to help Dennis make his vision a reality. Kayode grew up in rural Northern Nigeria where, in his childhood, he gardened and raised chickens, rabbits, guinea pigs, ducks and geese. His career included working as a deputy director of an air pollution agency and as the environmental program manager of a postal facilities group. In 2011, Kayode and Denise participated in an organic farming program at ALBA (Agricultural Land-Based Training Association) in Salinas to learn about management practices they could use on TAC Farm. (www.albafarmers.org) “It was super, one of the most enriching programs,” says Kayode. 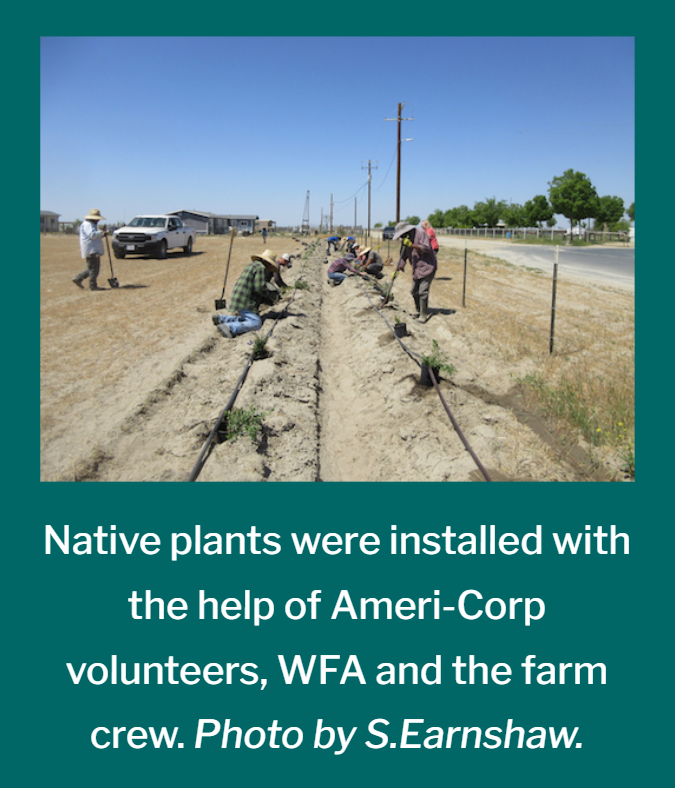 TAC Farm grows okra, black-eyed peas, collards, mustards, kale, swiss chard, cantaloupe, watermelon, alfalfa, oats and edible Jute leaf. Many of these crops were grown in the early days of the Allensworth community. TAC also plans to raise rabbits and earthworms for composting and to sell for fishing and gardening. In addition to raising crops and livestock, TAC envisions collaborating with the Allensworth Historic State Park. “We want to have living history, expose people to these foods, show them how to grow them, and also supply food to vending at the park,” says Dennis.

Denise is leading an effort to update a community plan for Allensworth that will include creating a trail linking TAC Farm to Allensworth State Park and Atwell Island. This “Island” is the site of a Bureau of Land Management restoration project which includes 8,000 acres of restored native valley grassland and wetlands that provide habitat for migratory waterfowl, shorebirds and songbirds.

With a cost-share EQIP grant from NRCS, Dennis and Kayode planted their first hedgerows and windbreaks. In the spring of 2021, with funding from CDFA’s Healthy Soil program, the Wild Farm Alliance helped them plant another one-half mile of native plant hedgerow and windbreak, bringing more biodiversity to the farm and to the region. TAC Farm uses organic farming practices. Kayode helped plan and install drip irrigation on the farm in order to conserve water and save manpower. They also plant cover crops and use compost on the fields to improve the soil’s fertility and tilth.

Kayode recognizes the importance of creating biodiversity, “The bottom line for the success of any farm, especially an organic farm where you can’t use chemicals, is the ability to attract beneficial insects, organisms and animals that benefit the future of the farm. It’s in our best interest to bring in pollinators that help make the farm what it needs to be.” 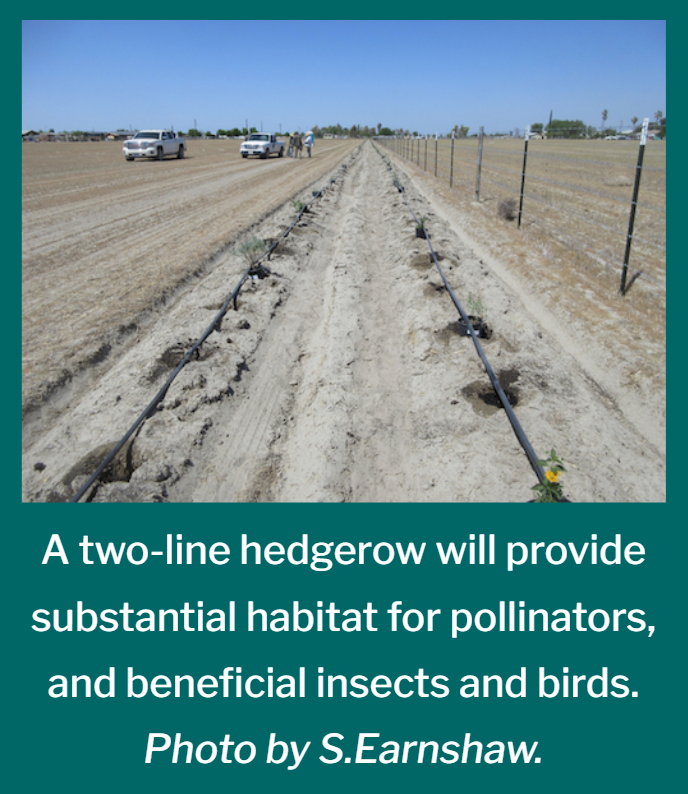 TAC Farm’s work has transformed its land. When they first started farming, there were no birds or insects, except gnats or mosquitoes, on the farm. “Now, we have bees, wasps, owls and other types of birds, hawks, lizards, coyotes, snake. We’ve seen all kinds of life,” says Dennis. “Genett Carstensen, NRCS Soil Conservationist, who really helped us to get the farm up and going, said not too long ago, ‘Shh, listen. What do you hear? You hear the birds and bees. All kinds of life are teaming out here. When I first came, there was nothing.’”

Dennis’s philosophy about caring for the land is based in his spiritual beliefs. “We are stewards of this earth, this creation. As stewards, it is so important for us to be able to work in harmony with nature, not against it. As we work in harmony with it, we increase the likelihood of all benefiting as opposed to just humankind while the Earth is destroyed. We are out of balance right now which is why we have to do corrective measures.”

Kayode is also motivated by his concern for future generations. “I believe that we must do our part to save what we see now for posterity.” In addition to their agricultural work, the community is helping to develop young people into environmental stewards through a summer enrichment program for 7th and 8th grade students funded by the county. Students take classes to learn about environmental issues, such as groundwater and air pollution, and make presentations for the community and elected officials.

Dennis’s advice to other beginning and smaller farmers is to look for assistance. “There really are resources out there. More and more, they are not as hard to find as they once were. There are the USDA and NRCS but also other organizations, such as the Wild Farm Alliance and the Xerces Society. Initially, it seems overwhelming but once you tap into resources, then all of a sudden, you get connected to others and pretty soon, you become part of a community.”