A thick layer of compost will suppress weed growth in the newly planted hedgerow at Blossom Vineyards. Photo by T. Taylor

Wild Farm Alliance is working with several California growers who were awarded funds to implement hedgerows through the CDFA Healthy Soils Program. This blog with Frank Olagaray of Blossom Vineyards is the first in the series.

“My beekeeper says that he likes being on my ranch because it is alive,” states Frank Olagaray of Blossom Vineyards. Several years ago, he planted his first hedgerows to attract pollinators and beneficial insects to his farm. “There are always pests out there so if there is anything that can help out by providing a home for beneficials, why not try it?” says Frank. With funds from the Healthy Soil Program (HSP) this year, he now has two miles of vibrant hedgerows weaving through his organic almonds, walnuts and olives, and nonorganic wine grapes. 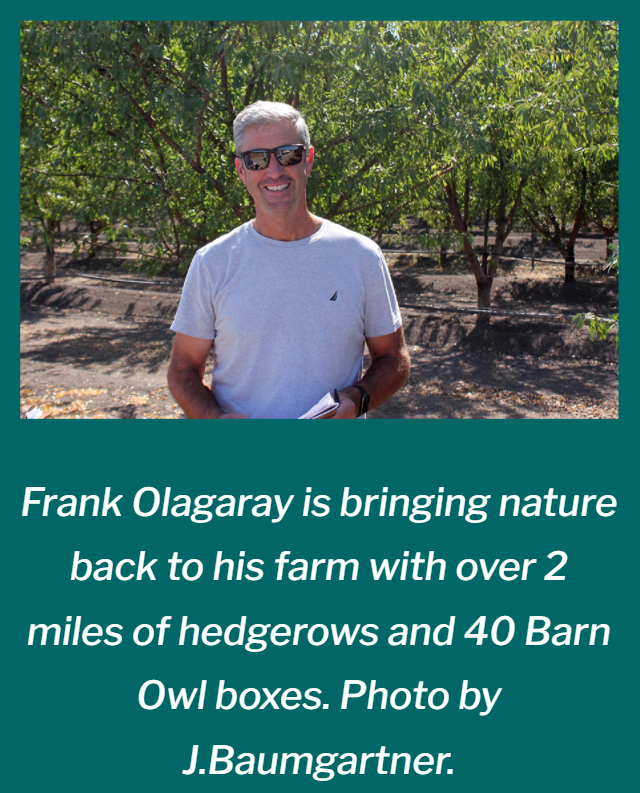 Frank learned from talks given by the Xerces Society, and from Sam Earnshaw of Hedgerows Unlimited, who helped him with both plantings. He put in a mix of 20 native plant species in the first hedgerows and increased the mix to 27 in the new one. Frank states, “I believe in biodiversity. I’m planting native plants because of their function - not because they look pretty, but they do look nice.” According to Sam, “Native plants are really better— a complex of beneficial insects has evolved with them, and the plants are more easily established. We strive to plant a pallet of natives that sequentially flower year-round - that way there is always food for the beneficials.”

Efficiency is paramount on this farm—it has to be with over 1,500 acres of crops in the mix. Frank proactively dealt with the weeds by shoveling out Bermuda and Johnson grass rhizomes in the organic fields, and using herbicides in the non-organic areas. Next, drip irrigation lines were laid down and covered with a two-inch layer of high-carbon compost made from yard waste. By planting into this compost, any germinating weeds would be smothered, and would also be starved since the carbon layer ties up nutrients the weeds would otherwise utilize.

Hedgerows typically need irrigation only during the first three years when the plants are getting established, because native plants are adapted to California’s climate and are drought tolerant. However, Frank irrigated some of the hedgerows beyond three years because “they looked pretty sad this spring without water,” he said. He was concerned that the drippers might cause root rot but the hedgerows were fine. 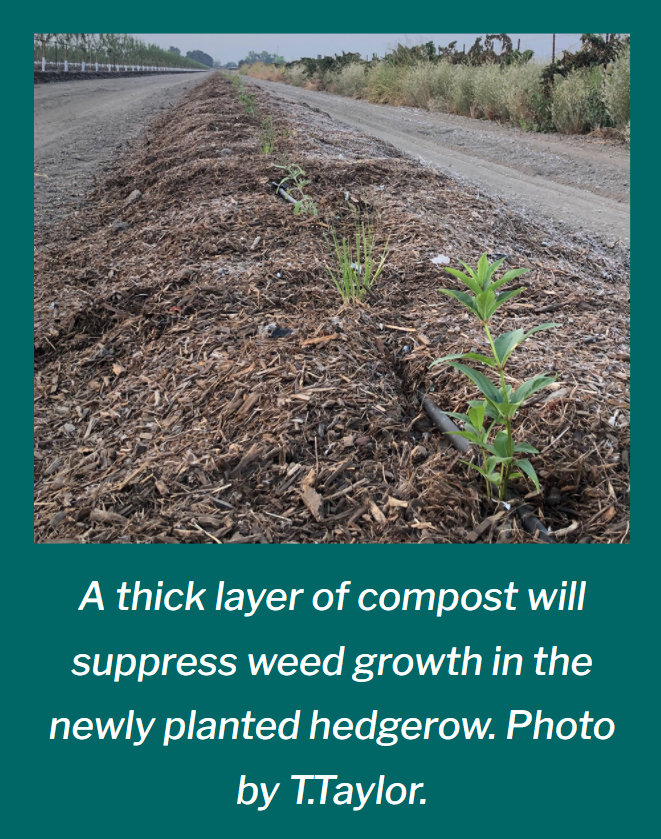 It is already working! In 2019, he did not bring out any honey bees for his young almond trees because he did not want a crop yet they produced 400 pounds per acre relying only on naturally occurring pollinators.

The hedgerows were helping to draw them in. Frank states “My beekeeper had all the bees out to other people who were paying.” He’s not sure who exactly was doing the pollination, but has some ideas. He continues, “I’ve seen lots of little insects, bumble bees and hummingbirds on the farm.”

What’s more, there’s natural pest control occurring. Frank says, “Ever since we’ve put in the hedgerows, we have not sprayed for mites in the almonds or walnuts. For me it is remarkable because that means I don’t have to spray. There are a lot of [beneficial] six-spotted thrips in the orchards and we are not spraying any harsh chemicals so maybe they are there naturally, or maybe the hedgerows are helping. There are predatory mites helping too.” He does see some aphids in the walnuts but also lots of lacewings are there consuming them. Frank muses, “If you provide a place for them to live…”

In addition to planting hedgerows, Frank has encouraged biodiversity on the farm by planting cover crops and installing bird boxes. His cover crops include seven different plant species. He has forty Barn Owl boxes to control the rodent population. According to Frank, "The owls eat a lot of rodents. Every winter when we clean out the boxes, there are four inches of waste pellets that the owls have regurgitated, full of bones. They don’t do 100 per cent but I sold my gopher-baiting machine because the Barn Owls are doing an okay job.” 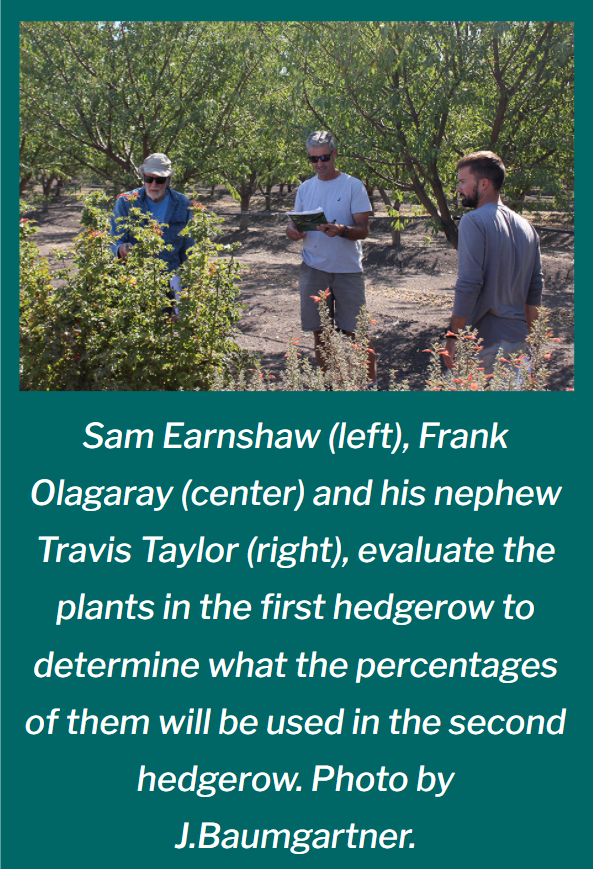 Frank expects his neighbors will become curious when they notice his hedgerows along some of the main roads. When asked what he would tell other farmers, he said “Just do it and see. Get help from Xerces Society and WFA; and NRCS [Natural Resources Conservation Service] has funding. Tell them to get off their a- and give it a try.”

Wild Farm Alliance assisted Frank with his HSP application and by partnering with Sam, with his hedgerow installation. These “living fences”—hedgerows—which go back in Europe to the Bronze Age, spanned over 500,000 miles in the UK. Blossom Vineyard hedgerows are helping us get closer to our goal of Hedgerows to the Moon and Back—a stretch equating to these historic miles of hedgerows in the UK.